Nonku Ntshona  is the founder of Nonku Ntshona & Associates Quantity Surveyors (Pty) Ltd (NNAQS) as a medium sized quantity surveying company based in Johannesburg, South Africa. Founded by Nonku Ntshona, the company brings to bear her in-depth knowledge of the property development and construction industry, and a broad range of skills gained from more than 10 y e a r s e x p e r i e n c e w o r k i n g o n p r o m i n e n t development projects in South Africa and the broader African region. The company comprises of a team of professionals largely women who have gained recognition in the Quantity Surveying profession and who bring expertise in their field of knowledge to add value to the company's range of competencies. The vision of NNAQS is to become the most sought after and distinguished quantity surveying ?rm in South Africa, while its mission is to be a catalyst for change and enable a greater role for previously disadvantaged societies, concentrating on increased participation of women in the construction industry. 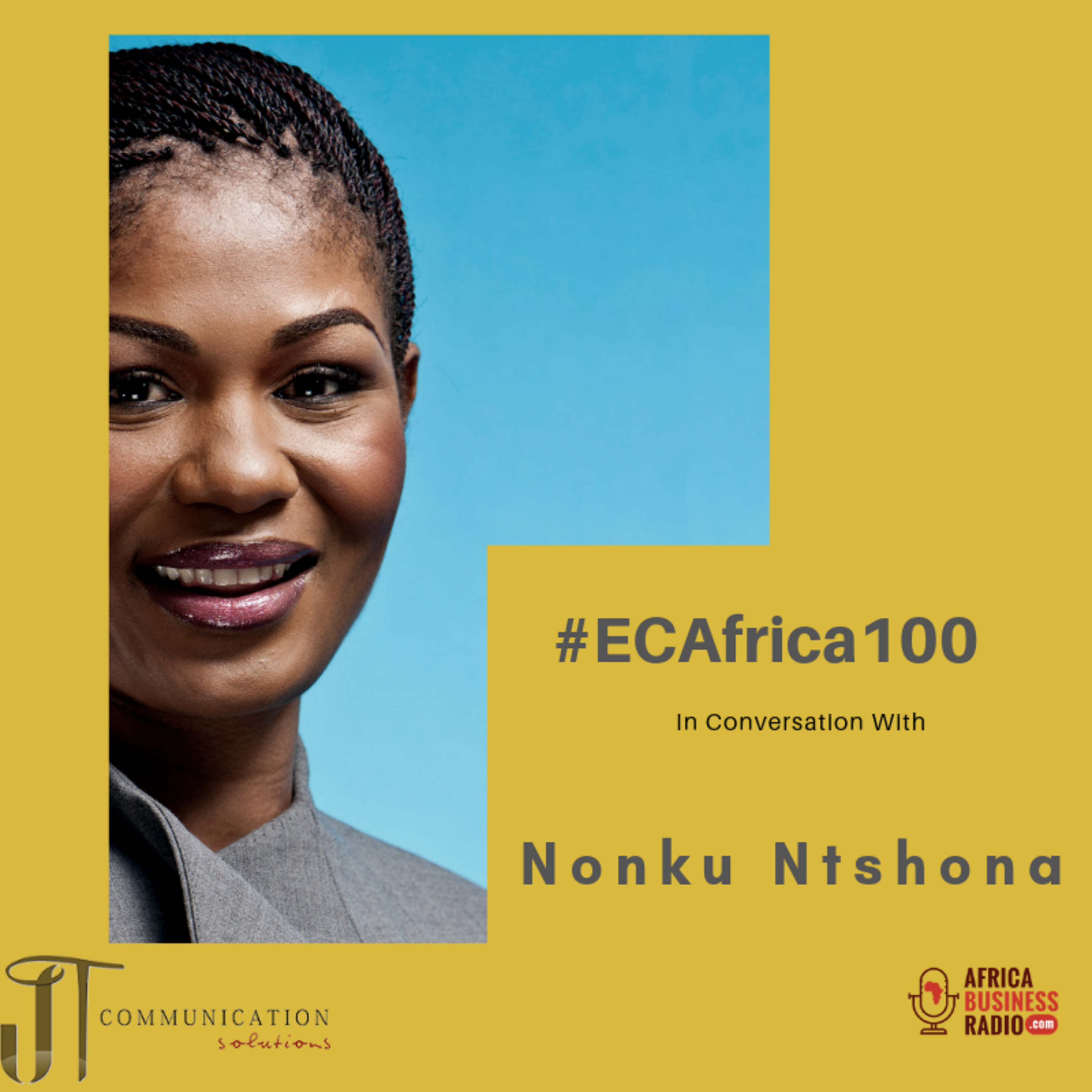 ECAfrica100 in Conversation With Velile Sithole

Velile is the CEO of Native Rhythms Productions, a Black-owned company formed in 1998 to offer value-oriented services across the entire entertainment industry’s value chain. The company’s strategic thrust is music publishing, music production, music marketing and promotion, licensing and distribution. Other ancillary services are events planning and production, such as concept concerts. Recently, the company has entered the film industry through the production of niche documentaries focusing on cultural related rituals, as well as popular culture such as hip-hop.

The company was founded on the belief that entertainment, through music and other forms of artistic expression, it is possible to communicate with people of all races and cultures and that that competing ideologies could be brought together whilst bridging cultural and racial divides.

ECAfrica100 in Conversation With Sibu Mpanza

Sibu Mpanza, was born in Mpumalanga, raised in Cape Town and currently lives in Johannesburg, South Africa. Sibu is a YouTuber and content creator who focuses on personal topics and societal current affairs. Sibu’s YouTube journey began in 2014 when he added a video of his own onto YouTube and after a mere week, he had just over 100 subscribers. In October 2015, Sibu decided to enter the Samsung Social Star Competition, after a few weeks of trying to get people to vote for him using his YouTube Channel, Facebook, Instagram and Twitter, he made the top 3 and got the opportunity to fly to Mauritius with Joann Strauss, Minnie Dlamini and Gareth Pon. Sibu ended up winning the competition and became the Samsung Social Star 2015/2016 as well as gaining Joann, Minne and Gareth as his mentors. 2016 was an exciting year, from winning Runnerup for the Top YouTube Channel in Africa to reaching over 3000 subscribers on his YouTube Channel. Other milestones include being nominated for a Student Village Youth Influencer Award and making it into the Top 3 of the Cell C #BreakTheNet Competition with #GetSibuToLA trending for 3 weeks. 2017 saw Sibu appearing on 8 achievement lists including; Mail & Guardian Top200 South Africans and Kellman20 list of SA millenials to watch. He packed his bags and moved to Johannesburg where he started his own Online Content Creation company - Sibu Mpanza (Pty) Ltd where he has worked with over 20 brands that included Standard Bank, Burger King and Takealot.com. He continued to create content for YouTube and reached 8000 subscribers.

ECAfrica in Conversation With Natalia Molebatsi

Natalia Molebatsi is a writer, singer, and poet (and often experiments with jazz and hip hop). She is an events coordinator, programme director and host of PoetryLives on Unisa Radio. She was born in 1981 in Tembisa Township in apartheid South Africa and now lives under the lights of Johannesburg. Natalia is the author of Sardo Dance published in 2009 by Ge’ko, and her CD Natalia Molebatsi & The Soul Making was born in 2015. Her poetry can also be found in Letter to South Africa: Poets Calling the State to Order, Happiness the Delight-Tree: An Anthology of Contemporary International Poetry, New Coin, and the Anthology of World Poetry (2010) among others. Her academic writing appears in Scrutiny2, Rhodes Journalism Review and Muziki. Beyond South Africa, Natalia has performed poetry and facilitated creative writing workshops at a number of universities and festivals in among others Nigeria, Senegal, Kenya, Zimbabwe, England, Italy, Azerbaijan, Argentina, Palestine, United States and Germany.

Siya is an entrepreneur who inspires people to live to their full potential and recognize that they are living in the greatest Era. He has authored and self-published the book "Before You Get Married " which received a great response and generated substantial sales. Siya also works as a Senior Contracts Manager (Burkina Faso and Guinea) at Moolmans.

Sheila Leocádia Pires was born in Mozambique and moved to South Africa with her family at the age of 12. She is a radio and television producer/presenter. Her commitment to critical thinking is rooted in her identity as a woman and a Catholic, and she does not shy away from raising contemporary and controversial issues related to women, youth and African politics in her programs on Radio Veritas South Africa.

ECAfrica100 in Conversation With Ashraf Garda

Apart from being talk show host, MC, Professional Public Speaker, Ashraf Garda is the Co-Founder of the Champion South Africa movement which was birthed with the desire to multiply the number of champions in the country to help turn South Africa into a champion nation. The movement, launched in November 2015, is currently asking: What are you doing to build your country Several local leaders, such as Vusi Thembekayo, Khanyi Dhlomo, and Yvonne Chaka Chaka, were chosen to be part of Champion South Africa, so they too can spread the message and urge more people to become champions.

Ashraf believes that South Africa will become a champion nation when the government, business, and civil society synchronize its efforts towards the goal of becoming individual and collective champions.

In April 2011, he became the host of the South African Broadcasting Corporation's investigative program "Special Assignment". During the 2010 World Cup Ashraf provided analysis on the games as well as the social impact of the World Cup on CNN, Al Jazeera, CBC Canada, and SABC 2's Morning Live.

Born in Johannesburg, South Africa on 4 June 1962. Ashraf lived with his parents in Fietas until they had to relocate to Lenasia due to the Group Areas Act of the South African Apartheid regime. He married Jamela Cassim and together they started a business retailing textiles in the Oriental Plaza, called "Fabric Fantasy". Ashraf's entry into radio began when he hosted sports shows on community radio stations "Radio az-Zaheer" and later "the Voice,95.4fm".

ECAfrica100 in Conversation With Pops Mohamed

Pops Mohamed (born Ismail Mohamed-Jan) is a South African multi-instrumentalist, jazz musician and producer.
Born in Benoni, Gauteng Pops Mohamed's career in music was the logical outcome of an early exposure at Dorkay House to the likes of Abdullah Ibrahim and Kippie Moeketsi. He started his first band The Valiants, at 14. Known by fans as the Minister of Music, he plays a wide variety of instruments: African mouth bow, bird whistle, berimbau, didgeridoo, guitar, keyboard, kora, and the thumb piano. He is also known for his wide range of musical styles which include kwela, pop, and soul. He produced Finding One's Self, the late Moses Taiwa Molelekwa's award-winning album.
Pops has also performed regularly with and sits on the board of the Johannesburg Youth Orchestra Company.

ECAfrica100 in Conversation With James Urdang

James Urdang is the Founder and CEO of Education Africa, is a Social Entrepreneur, humanitarian and Public Speaker. He has dedicated more than 29 years helping to bring about real, positive and meaningful change to the lives of disadvantaged Africans.
James has been recognized globally and is a recipient of the Klaus Jacobs Awards in Switzerland for Social Engagement and Innovation.
James was mentored by the late Walter Sisulu and was honored to have been asked to speak at the funeral of the late Chris Hani. James was the first person in the non-profit sector to lead President Nelson Mandela and had the honor of presenting him the Golden Doves of Peace Award and accompany him at a number of Education Africa events.
The biggest challenge for James has always been the sustainability of Education Africa and his dream is to create an endowment fund so that Education Africa can be self-sustainable

ECAfrica100 in Conversation With Nolly Qunta

WeTalk is over a year old and grown enormously. They have been named as the best business twitter platform in their year of empowering entrepreneurs on Twitter through hosting business chats. A connection to entrepreneurs should not be restricted. They built, through #WeTalkBiz a platform that connects like-minded game changers to discuss and empower each other on how to tackle issues in the 21st century.  WeTalk has developed to be an agency that is helping create the social media marketing industry. Social media has changed a lot in the past years and has proved to be a trusted medium of communication and connection for brands.